Most of the processes we have the greatest experience with involve significant consistency changes in the material being manufactured.  This gives us a unique insight in the most effective ways to manufacture them

Continuous processing is not suitable for all forms of manufacture, for example when a multiplicity of grades and variations are required or where there are startup and shutdown issues that result in waste product.

In our industry, batch manufacture generally centres around one or more process vessels which are used to heat, mix and/or cool the product being manufactured.  Below are examples that show this principle.

Grease is a gel-like material used for lubricating mechanical parts where oil would normally leak away. The process involves thickening oil with either a soap, complex, silica or bentonite clay.  The process vessels are jacketed to use a combination of low speed agitation with scrapers to avoid hard deposits building up on the internal walls and medium speed agitation running in the opposite direction to give a vertical flow to maximise the mixing action.

In smaller scale plants, a single unpressurised vessel is used and on larger plants two vessels are used. The first one is an autoclave with the capability of being pressurised, which raises the temperature at which the reaction occurs, helping to reduce processing time. The second is a finishing kettle, which is normally unpressurised, but some manufacturers opt for a vacuum rated vessel to allow de-aeration in the vessel, rather than using an in-line unit.

The largest scale projects are normally to manufacture lithium grease, one of the most widely used grease types in the world.  This is because of its temperature range of nearly up to 200°C, predicable mechanical behaviour and satisfactory water resistance. It is regarded as having the best all-round performer of reasonable cost.

Lithium Grease is made with a combination of lubricating oil, lithium hydroxide and an organic acid.  The batch is heated to almost 200°C to create lithium stearate out of the hydroxide and acid and dissolve the stearate into the oil. It is then cut back with more oil to give the right thickness, cooled, treated with additives, milled, filtered (if required) and de-aerated.

There are other types of grease that perform better in one or two of these three characteristics, but they are generally more expensive and can have other performance weaknesses. As a result, they are used in specialist applications.

One of the products we were involved in the manufacture was the production of gelled alcohol fuel. The formulations, methods and the key ingredients are the same as gelled alcohol hand cleaner, which is now becoming increasingly in demand due to the spreading of viruses on a worldwide scale.

The core of the process involves gelling alcohol with a thickener such as methyl cellulose, a two stage process that involves high shear dispersion and then blending, during which the PH needs to be monitored and adjusted. Other ingredients can be incorporated such as a skin moisturizer, essential oils, scent, etc.

Upon completion, the product’s viscosity needs to be checked and then packaged, either by weight or volume.

The equipment involves two stainless steel process vessels; a smaller one with a high shear mixer to prepare the thickener and a larger vessel to blend the thickener with the alcohol and the other ingredients mentioned above. No heating is necessary.

We have been involved in the production of wax polishes (see picture above) and modelling wax. Two entirely different applications that use the same type of wax material.

Mixing wax is easier than grease manufacture because if you heat it above its congealing point (a blurred kind of melting point), it turnes into an easy to handle liquid. This means the mixers do not require scraped agitation. The downside, is that once it cools below the congealing point, it sets hard, which means all the pipwork has to be trace-heated to maintain flow.

Wax polish also uses White Spirit or similar volatile liquid, to the equipment generally has to be ATEX Rated to avoid the fire risk.

Modelling wax has the additional challenge of blending in powders, requiring similar mixing to grease manufacture.

Both wax processes share the common challenge of cooling during packaging. The product has to be decanted as a liquid and then cooled to solidify it before it can be packed. With wax polish, the cooling is done in the tin but with modelling wax, it is cooled in a rubber mould to create the shape of the bar that is supplied to the customer.

DOT 3 and DOT 4 Brake fluid is hygroscopic and if it absorbs moisture, its boiling point reduces to a potentially dangerous level, so the blending and packaging must be done with a dry blanket in the airspace above. We met this challenge in a unique way by using a molecular seive to generate nitrogen on-site on one plant an putting nitrogen through a silica gel dryer in another. 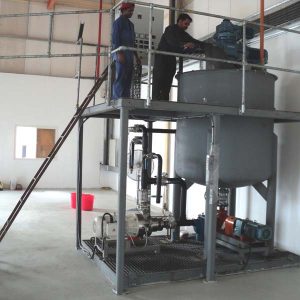 This website uses cookies and third party services to give you the best experience. Agree by clicking the 'OK' button or select your Settings Ok
Go to Top