Most of the processes we have the greatest experience with involve significant consistency changes in the material being manufactured, giving us a unique insight in the most effective ways to manufacture them

Continuous processing is suitable for where a large volume of unvarying product needs to be made.  Generally, it involves feeding materials at a carefully controlled rate into a unit that can be as simple as a static mixer or something more complex such as a scraped surface heat exchanger (SSHE), climbing or falling film evaporator, mill or disperser.

Known as “Bunkering”, this is a rather unique process involving the continuous blending of two different grades of fuel oil on the jetty, where the fuel is loaded onto the ship. Modern systems use a trailer with powered flowmeters, modulating valves and a static mixer. However, we were able to renovate and trailer-mount a older Fisher Blender, that uses no power, but instead uses differential pressure between the two incoming fuel supply lines to operate a tamdem modulating valve.

A unique feature we incorporated was to build a bi-directional trailer with a draw bar at both ends, so the marine blender did not have to be reversed on the jetty. That way, we significantly reduced the chance of the blender being accidentally reversed off the side of the jetty into the sea! 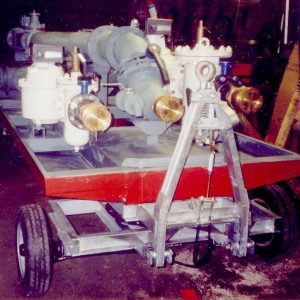