Skip to content
Home/Blog/Commissioning visits – what we have learnt

Commissioning visits – what we have learnt 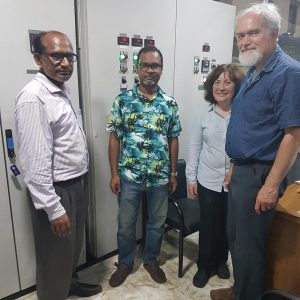 Add in the international dimension and the picture becomes even more varied. We have made several commissioning visits over the years to install lubricating grease manufacturing equipment to countries, including Turkey, Qatar, China, Bangladesh and Algeria.

In the UK, we are accustomed to a temperate climate and also an environment where Health and Safety and the demands of insurance companies are two key factors. We are also used to strictly applied HSE rules where errant footwear can be challenged at a 100 metre distance, work stopped due to a missing or incorrectly filed method statement, and Personal Protection Equipment requirements can change halfway across a room.

Overseas, however, it can be very different.

Bangladesh has no summer or winter; it has a tropical climate with a wet and dry season. Dry season is hot and dusty during the monsoon season but subject to short sudden bursts of heavy rain during that time. Rain was therefore all or nothing, rather than the periods of persistent drizzle that we often experience in the UK.

Our client’s hospitality was exceptionally high, right down to insisting on carrying our laptop bags for us. There was a strongly observed hierarchy where everyone has a specific role with the minimum of overlap, which did have the unexpected consequence that we were expected to only direct and supervise. Using our test instruments was fine and they took considerable interest on what we did. In rare, cases, we actually got to pick up our own screwdrivers, but the on-site skill level made that a rare situation.

We did not see one forklift truck in the workplace and it would have been difficult to use one, due to frequent floor level changes. Instead, manual handling was done by special gangs who would form a elongated loop chain to convey items from one place to another. The only powered lift was an electrical winch in the loading bay.

Personal Protective Equipment was familiar, with the exception of footwear. However, open-toed sandals were preferred instead of steel toe-capped boots by many of the factory staff.

The most noticeable aspect about Qatar was the extreme heat and humidity in the Summer. The thermal shock we experienced when going from the non air-conditioned factory to an air-conditioned office was so serious, that we increased the temperature setting on the office air conditioner to prevent our sweat turning into an icy layer. Furthermore, refrigerated air had to be ducted to the control panels to ensure the variable speed inverters remained within their recommended temperature range.

Also, there was a clearly defined hierarchy, both in public and in the workplace. In the public, there were three strata; at the top, there is the ruling class, made up of the indigenous population, who generally had freehold ownership of the land, a managerial class made up of skilled expatriates, who had a comfortable standard of living, but had no rights to buy property or land freehold and a working class, also made up of expatriates, whose standard of living is extensively documented in the media.

In the workplace, it was made clear that we could not instruct the people who were doing the work; instead, we had to instruct the overseers, who would refer the tasks down the chain of command.

Both these countries are situated on the Mediterranean and are either linked to or opposite Europe.  As a result have a far more European approach. Where appropriate, we were able to do hands-on work and although they do not have the strictly applied HSE culture we have in the UK, they use forklifts, have properly constructed railings on elevated walkways and are more keen to maintain a safe working environment.

The difference between Southern China and Northern China is far greater than most people would imagine. We have visited Beijing, worked in Tianjin and worked in Shenzhen. Beijing and Tianjin are exceptionally cold in winter and Shenzhen is exceptionally hot and humid in summer.

In the UK, we are accustomed to many people working at home, perhaps with a home office. In China, you can occasionally see the opposite, people living at the place of work. We only saw this once, where someone had built a bedsit at the back of an office, but providing long-term on-site accommodation for workforces is apparently not uncommon.

We were providing after-care for a fire-fighting robot and thus doing the bulk of the hands-on work, due to its specialisation. The staff looked after us well and provided tooling when we needed it. The most conspicuous aspect was their extensive use of cameras to photograph the workings while the robot was open.

No two countries are the same and often no two businesses in a country are the same either. The important lessons we have learnt are to read up about the country beforehand and to prepare for any eventuality before making the first visit.