Skip to content
Home/Blog/Is there a right and wrong way to de-aerate grease?

Is there a right and wrong way to de-aerate grease? 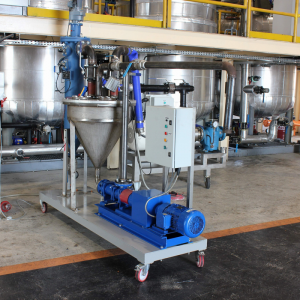 There is no right or wrong way to de-aerate grease.  In the perfect manufacturing process, there would be no air in the grease needing removal.  In reality, the agitation and product recirculation drags air into the grease as it thickens.

The air bubbles start off being relatively large and few, but if the grease is milled to break up large soap particles, the air also gets dispersed into a myriad of microscopic bubbles that make the grease appear to be cloudy.

Air in itself usually does not have a major detrimental effect on the grease’s performance but customers often think that a cloudy grease is inferior to a shiny clear grease.

The good but expensive method is to draw a vacuum on a suitably rated finishing kettle. Vacuum upgrading is not too expensive for smaller units but adds a lot on for larger vessels.
The alternative is an in-line de-aerator. The traditional unit that incorporates a spinning disc and vacuum chamber is particularly good, but complex and expensive.

We use a simpler system that pulls the grease through an orifice that merges the microscopic bubbles into larger ones, that mostly burst when exiting the nozzle at the packaging stage.  However, we have also made vacuum rated grease kettles for more specialist grades.