What can possibly go wrong? 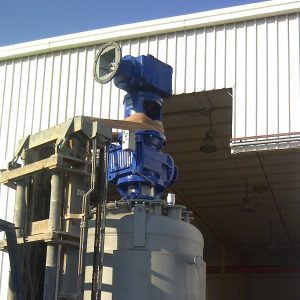 You can anticipate most technical and financial problems that could arise in an engineering project, but there can also be the totally unexpected ones that trip you up later.

Here are some typical unforeseen hazards learnt the hard way from past experience:

The blindingly obvious in hindsight

It is easy to address details such as pressure ratings, temperature ranges, capacities, etc. but overlook something simple like:

This can result in some very interesting improvisations, such as:

Safety Systems not Fully Thought Through

New equipment has to comply with Health and Safety Legislation and the customer’s and their insurer’s own H&S risk assessments.

On larger vessels, regulations require a safety grille across the manway, to ensure that an operator cannot fall into a vessel or become entangled with the agitation system. However, on smaller vessels with agitation on a lifting mechanism, an interlock is fitted to stop the agitation when it is raised and a sounder when it is being lowered are required.

A recent mistake we came across recently was the fitment of a sounder that sounded almost like the building’s fire alarm, resulting in personnel starting to evacuate whenever the mechanism is lowered.

Vessel fabricators often default to pressure testing heating jackets with water, which is fine for a steam heated application but can be a major headache when using a thermal oil heating system. They will drain the jacket after testing, but thanks to geometry, gravity and surface tension, pockets of water will almost always be left behind. When connected to a thermal oil system, all will be fine up to 100°C, but above that, vapour locks will form, stopping the flow and eject hot foam from the expansion tank vent, but will prevent an increase in temperature until all the water is gone.

Ironically, this is less of a problem on major installations, where a CDX tank is used, because the vapour locks are removed before the fluid reaches the circulation pump, but small installations do not have this. Instead, the system will need to be run at just over 100°C for a week or two to outgas the circuit. This can be avoided by either heating the vessel after testing with water, pulling a hard vacuum on the jacket, if it can take it, or purging with a solvent.

People generally think that assumed knowledge issues manifest in poorly written manuals, such as the 500 page pdf tome that tells you everything about the instrument you have just bought, except what you really need to know. However, it can also come up in unexpected places.

This happened on a plant where compressed air was piped in from elsewhere in the site and everything was fine during working hours. However, the batches often ran into the evening and at 5PM sharp, the compressed air turned off because that was the time when the maintenance people shut down the compressor, drained the receiver and then went home, as part of their daily routine and assumed everyone knew that.

Often available at an alluringly low price, these can turn quickly into a costly mistake.

For example, the wall thickness can be too thin for your application. If an ultrasonic tester is unavailable, you can roughly estimate the average wall thickness by weighing the vessel, carrying out a density conversion, estimating the total metalwork surface area and then dividing the volume of steel by the surface area.

The other extreme is to over engineer by picking a vessel with unusually thick walls and then find out that the heat transfer rate from the jacket is so low and the additional mass is so high, that the batch time is too long. This mistake it not easy to recover from.

Corrosion pitting is easy to spot inside a vessel but more difficult or impossible to determine in a heating or cooling jacket, which makes formerly steam heated vessels a risky choice.

What is lurking beneath the jacket insulation? Without removing the insulation, you cannot tell whether it is a plain jacket, dimple jacket, baffled jacket or limpet coil. You may be able to find out after completion by deploying a thermal imaging camera on the inside when the heat is applied, but that is rather late in the day!

Agitation systems may look in good order, but shafts can have slight bends in them that only become noticeable when you apply power.

Re-using legacy infrastructure is a good way to speed up an installation, only as long as it is fit for purpose and in the case of pipework, empty.

A grease manufacturer tasked an undergraduate student on work experience to put in a compressed air system.  He found two disconnected pipes that conveniently ran from one building to another. To save time and materials he connected one of the pipes to the compressed air supply, but he couldn’t determine which of the two pipes it was that emerged in the other building that he had connected.

To test which pipe it was, he turned on the air compressor, waited until the receiver reached full pressure and then turned on the valve to the pipe with the intention of seeing which end would make a hissing sound. Instead, he was met by a flustered employee who ordered him to turn off the compressor as soon as possible. He asked why and was told that a jet of water had just shot across the factory, narrowly missing him. His response was to ask whether the water out of the left or the right pipe. The response was of a somewhat heated nature.

The above is just a small sample of what can go wrong during a process plant project. Three pieces of advice are to pre-empt as much as possible, assuming nothing, check over and again during the preparation stages and keep a record or mental note of what does go wrong to make sure it does not happen the next time.

There is a fourth piece of advice, though: Never leave an undergraduate student unsupervised!